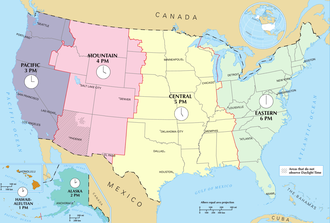 Time Zones in North America can often affect the performance of the players of sports teams both physically and mentally, as well as causing fans to lose sleep and sanity and due to late start times of games in different time zones. Let’s dive a little deeper on how time zones in North America affect sports.

Why were time zones created in the first place?

Since the earth is a globe, the sun hits the earth at different places at different times during the earth’s orbit around the sun. It is full daylight on one side of the earth while the other is in complete darkness. During the 19th century, as worldwide trade began to explode and communication began to be quicker, this difference in sunlight began to be a problem. For this reason, scientists came up with the idea of time zones to centralize and unify time across the world. This way, noon means noon all across the world, meaning that noon is the time that the sun is highest in the sky all across the globe. If time zones weren’t a thing, noon would be the sun’s highest point on one side of the earth, and if you were to rotate the earth just a few longitude lines, noon would be later in the day, and if you kept rotating, eventually noon would be in darkness. Time zones exist to standardize time so that everyone’s time of day correlate with the sun in the sky. So how do they affect sports?

Time Zones in North America and their large differences affect both sports teams, players, and their fans.

How players are affected by time zones

Sports teams often have to travel all around North America to play other teams in their league that are located in different time zones. For example, in the NBA, if the Portland Trailblazers had to travel to play the Miami Heat, they would have to travel 3,294 miles and cross 4 different time zones. That means that they would be four hours ahead of their usual time in Portland. This time change combined with jet lag can have a very negative effect on players. Studies have shown that lack of sleep can affect reaction time and also lower testosterone levels, both of which are significant in sport. This is especially the case in the NBA, MLB and NHL; teams sometimes play late into the night and then have to fly several time zones away to play the next day. This is the price teams must pay when competing at an elite level in sports.

How fans are affected:

But the fans suffer in their own way. Diehard fans will stay up into the wee hours of the night to watch their teams play, which can affect their daily lives and decisions, their performance at work, and their mood. To combat this, many fans are calling on local government officials in Toronto to rule the days after late night games work holidays and force employers to comply. This probably is not feasible, but it shows you how committed the fans are to their team and their city, and it shows you that the fans realize how much these late night games affect them negatively. In fact, we asked two Raptors superfans to tell us how the late start times affected them. Here’s what they had to say: The first, our very own Phil Goldberg. Phil, a die-hard Raptors was on vacation in England. I guess he booked his trip not thinking the Raptors would make it to the NBA Finals! Keep in mind, the United Kingdom is 5 hours ahead of the time zone Phil lives in North America. The weekday NBA Finals games, therefore, began at 2 in the morning and ended close to 5 where Phil was vacationing. Another, Robinson Clayton, had this to say: “3:00am start for me in Europe right now. Made it to the 2:00am start games last series but by the time the games are over it’s usually getting light out.” These testimonies show you how fans are trying to deal with the difference in time zone so they will be able to watch their favorite team play.

As you presumably know, the Toronto Raptors are currently in the first NBA Finals, playing against the Golden State Warriors of Oakland. The first two games were in Toronto, and they started at 6 pm Eastern Time, a perfectly normal time. This start time provides plenty of time for fans to relax and watch the game while also getting to bed at a reasonable hour. However, with the next three games being played in Oakland at Oracle Arena, the start time of 9 pm Eastern time, 6 pm Pacific is a difficult time to justify staying up for a lot of fans. A typical NBA game will last around two hours, with the possibility of thirty minutes to an hour longer due to injury delays and overtime. The difference in time zones can lead fans to skip the game in favor of sleep, causing them to miss some of the most important and exciting  moments of the season, and the fans that do sacrifice sleep to watch their team deal with the dreaded consequences of sleep deprivation the day after. And what happens if the Raptors lose? The fans have stayed up two or three hours past when they normally would just to watch their team lose, which puts them in an upset mood for the rest of the night and the following day.

There are no easy solutions to the time zone in sport problem.

One could ask why don’t teams just move the game times up earlier in the day to please fans? This would be a good solution, but there are numerous problems with this idea. For example, say the game was in Toronto, and the game was moved up to 4 pm, which means a 7 pm start in Oakland. This poses an obvious issue with many fans’ work schedules with normal workers getting off at 5 pm. At this time, the game would already be halfway over, which means these workers would not bother to buy tickets, meaning less ticket sales and a whole other host of problems for the team and the city and its fans. Also, many fans like to turn these games into parties with friends, or dates with their significant others, and having a game start this early would not let fans make plans around the game.  Another reason this would not be a smart business decision for all parties involved is because of primetime television. TV station like to keep their “primetime”(the time when the station has the most viewers) spots open for big games or other important events. Significantly less people would be watching the game if the time was moved up. Unfortunately, professional teams seem pretty unwilling to budge on this issue.

Time Zones will continue to affect sports in the near future, especially the Tokyo 2020 Olympics.

This is perhaps the worst case of time zone intervention in sports. The summer olympics will be held in Tokyo, Japan, in the summer of 2020. This worldwide event is truly inspiring and wonderful, but issues arise with the time zone difference. If you live in the Eastern Time Zone, Tokyo is 13 hours ahead of you. This is practically the opposite side of the world from you. This unfortunately means that your favorite event will likely be taking place while you are sound asleep. Unless you are an absolute madman and you stay up all night or wake up extremely to watch an event, you will never see anything live. Your favorite beach volleyball team will be going for gold while you sleep peacefully. Your favorite marathon runner will be grinding away for four+ hours while you dream about rainbows and unicorns. Granted, Olympic events are not as coveted for live viewing as say the NBA Finals, but they are still watched millions, probably billions of times all over the world, since the Olympics is a worldwide event anyway. This 13 hour difference will definitely make for an interesting experience. If you’re lucky, you might be able to catch an event if you flip on the TV right when you wake up, considering that if you wake up at 8 am, 9 pm in Tokyo.

Other events that will be affected by time zone differentiation are the World Cup in Qatar in 2022 (7 hours ahead of the Eastern time zone), the 2022 Winter Olympics in Beijing, China (12 hours ahead of the Eastern time zone), and the UEFA Euros 2020, the European soccer championship that is being held in 12 European cities ranging from London to Rome to St. Petersburg. If North American viewers want to watch these events live, they will find themselves waking up and going to sleep at all hours of the day and night.

Obviously, time zones serve a much-needed purpose in our modern world. Without standardized time, the world would be a mess. But the time zones in North America and the difficulties that we have to deal with from the existence of those time zones affect all of our lives, especially the lives of the players and fans of sports teams that have to travel to play elite competition. But after all, we must realize that sports are still games and that they serve to entertain the public. Is a game something to lose sleep over? It’s up to you to make that decision, and you must weigh the pros and cons of the situation. Obviously, if it is the team’s first championship, like the Raptors in the Finals, you definitely have a harder decision on your hands than just a regular season game. But just remember that whenever you see your team and players out on the court or field or dirt, just remember that they are affected by the time zones just as much as you are, and the same goes for your opponents when they travel to you. Time zones affect sports in a way that not many other factors can. Injuries, bad coaching and management, and other unpredictable circumstances can come upon a team at any time, but time zones are always there, predictable and endless, and they affect everyone the same way, no matter if you’re on the court or off.