This is What’s with Toronto Raptors Fans

This is What’s with Toronto Raptors Fans 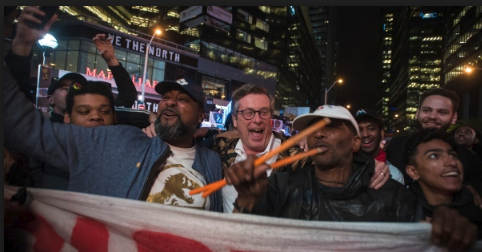 The Toronto Raptors are currently in the 2019 NBA Finals. They have never had a problem bringing fans to games but during the 2010-12 seasons the Raptors had attendance lows of 16,000 -17,000 people at games. Now that they have made the finals they sell out the arena and have 20,000 or more attend Jurassic park. The problem with having so many people in one spot can be the disruption it causes. The Toronto Raptors fan base has always been known as the nice and calm fan base, but as of Game 5 things may have changed.

Game 5 of the NBA Finals had the Raptors playing the Warriors to win the Championship 4-1. Fans were super excited for the game lined up at bars, the street and watching on television. When everyone heard the news of Kevin Durant playing people became nervous and the tension of the game was known around Toronto. During the game, Serge Ibaka was playing defence on Kevin Durant and he went to do a move on Ibaka which caused Durant to tear his Achilles. Fans were cheering when this happens causing the Toronto Raptors own players such as Ibaka, Lowry, Green to tell fans to stop cheering as it was inappropriate. This game was shown on national television (ESPN) and players/media around the NBA had choice words about the fans in Toronto.

The question that can be asked is were these fans true fans to the game or bandwagon fans? Even politicians are bandwagoning too! Check this out if you don’t believe me.

After the game the streets were still rowdy after the Toronto Raptors lost their chance of going 4-1. They now were 3-2 and going back to Oakland for another chance of winning the Championship. Fans on the street saw Warriors fans and started to trash talk to them. I am sure the Warrior fans were talking back as any passionate fan would do. As seen in the video of the altercation Raptors fans sucker punched the Warriors fans. Could this have been prevented if more police were out when they realized the Raptors lost?

Things didn’t end at the altercation of the fans. A video emerged of Raptors fans yelling at Sonya Curry (Stephen Currys mom). The fans were saying things such as F*** You to her and verbally abusive words. They didn’t stop they also diss Dell Curry who played for the Raptors. In the video Sonya was talking back to the fans due to the words being sent her way. Stephen Curry responded to the incident on his media availability saying “It’s kinda stupid to be honest, in terms of people camping outside of our hotel just to yell expletives at us & our family.”

The Raptors need to send out some memos on how fans should be acting as the Toronto fans do not know what to do. This is their first time in the NBA Finals and the city is not prepared for all the commotion. In fact the NBA should send out more memos to fans attending games because it’s not only the Raptors fan base, but many players throughout the NBA have been dealing with unruly fans.