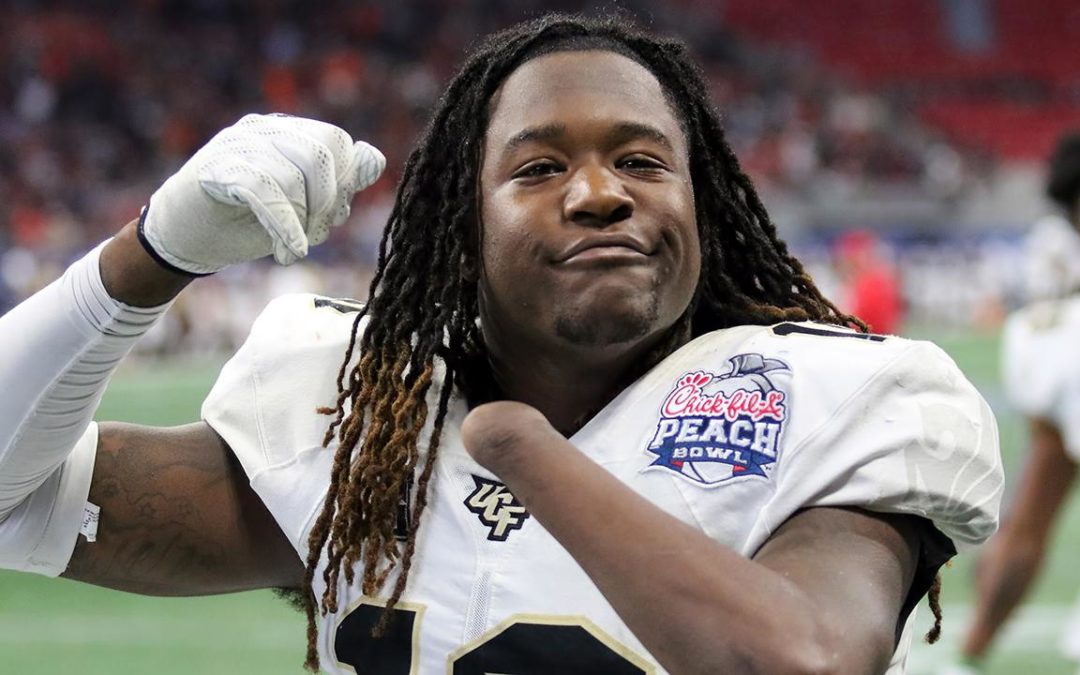 Why is Shaquem Griffin so popular?

Some people may wonder why Shaquem Griffin is so popular or why he is in Nike commercials. Shaquem wasn’t selected as a top pick in the draft or even considered to be drafted, but he worked tirelessly to even be considered a draft pick. He even broke records at the NFL Combine, a showcase for players that are seeking to go to the pros. When you see Shaquem, it’s easy to see that he is not your typical athlete. Shaquem Griffin was born with amniotic band syndrome (ABS), which led to the amputation of his left hand when he was 4.

What is Amniotic Band Syndrome (ABS)?

Amniotic band syndrome (ABS) is a rare condition affecting approximately 1 in every 10,000 babies that happens during the first 20 weeks of pregnancy. There is no agreed upon theory as to what causes this condition, but the common consensus is that it is not genetic. Amniotic band syndrome occurs when strands from the amniotic sac separate and become entangled with various parts of the fetus, such as the limbs. For Shaquem Griffin, this happened to his hand, leading to the fingers on his left hand to never fully develop. There are reports that at the age of 4, his mother found him in the kitchen with a knife wanting to cut his fingers off because of the agonizing pain that they were causing him. The next day, his parents scheduled the amputation of his hand.

What sets Shaquem Griffin apart from other athletes?

From being drafted in the NFL, to being a Peach Bowl champion, Peach Bowl defensive MVP, AAC Champion, Sports Illustrated All Bowl Team, and NCAA Inspiration Award, Shaquem Griffin has always been defying the odds against him and has never allowed ABS to stop him from achieving his goals. Not only did Shaquem make it to the NFL, but he plays on the same team as his twin brother. Despite the fact that Shaquem Griffin lacks a hand, he has made NFL history as the first player with only one hand.

When Shaquem is not playing football, he advocates for The Lucky Fin Project, an online support group for people with limb differences and is often featured on their website and Facebook page.

He also values each and every one of his fans, always taking the time to meet and talk to his fans and take pictures with them. Shaquem has expressed his desire to inspire young children also affected by amniotic band syndrome, and his story quite certainly does that. Shaquem has proven to be an amazing role model and inspiration to children, especially those with disabilities, encouraging them to never give up when facing adversity. When asked about his disability in an interview, Shaquem said:

“I don’t even like hearing words like (handicapped)…Because if you got a disability or a handicap, that means you’re limited to certain things. And I don’t feel like I’m limited to nothing.”

What is Shaquem’s relationship with his twin brother, Shaquill, like?

Shaquem and Shaquill Griffin are inseparable and have been since a young age. When they were just 8 years old, they made a pact to always stay together, and they honored that pact even as they made their way to the NFL. If Shaquill was offered a position on a football team, he would not accept the offer if Shaquem wasn’t offered one too. Once they made it on the same college football team, Shaquem faced such great difficulty in trying to prove himself on the team that he was on the verge of quitting. It was because of Shaquill that he decided to stay on the team because he knew his brother would not be the same without him.

Although Shaquill was born only 60 seconds before Shaquem, he is still very protective of his “little” brother and hates it when anyone teases Shaquem for being born with amniotic band syndrome. Shaquill steps up to Shaquem’s defense and does everything within his power to defend his brother. Shaquill has even risked his career to defend Shaquem, showing that he would sacrifice anything to protect his little brother.

What challenges has Shaquem faced in his journey to the NFL?

Ever since he was a young child, Griffin has faced a great deal of rejection due to his deformity caused by amniotic band syndrome. Many coaches did not want a player with only one hand on the field and would even instruct their players to target Shaquem. When Griffin was not playing football, adults would stare at him, and children would ask him what happened to his hand. Shaquem never allowed it to bother him, though, and he would even joke about his hand when asked about it, joking once that he went fishing and “a shark jumped up and bit it off.”

Although Shaquem and Shaquill were both stars on their high school football team, colleges would only offer football scholarships to Shaquill, and many of these colleges were some of the top schools in the country. Finally, both of the twins were offered scholarships to the University of Central Florida. However, once they made it there, the coach would put Shaquem on the bench while Shaquill was sent to play on the field. Many people doubted Shaquem’s abilities because of his hand, and he was even told that he “would only be a shadow of his brother.”

Griffin was finally given the chance to show off his skills on the field when the team had a change in coaches. In the last two years of his college football career, he had stats that would be considered great for any football player: 195 tackles, 18 sacks, 3 interceptions, and an incredible fumble recovery that he turned into a touchdown. He was even named the Defensive Player of the Year at his conference.

Despite Shaquem’s phenomenal college football career, he was not invited to the NFL Combine. When Shaquill heard about this, he was furious and publicly demanded his brother get a chance to play at the Combine. In addition to that, he also lobbied his coaches in Seattle to allow his brother the opportunity to play. The NFL finally recognized Shaquem’s talents, and he was invited to play at the Combine, where he broke the record for the 40-yard dash. After his record-breaking display at the Combine, many coaches still did not offer a position to Shaquem because of his hand. Finally, though, Shaquem was offered a position on the Seahawks to play alongside his twin brother.

Shaquem Griffin has never used his hand as a reason to feel sorry for himself or to give up when faced with a challenge. He has used the fact that he was born with amniotic band syndrome to work even harder and achieve anything he sets his mind to. In fact, Shaquem feels that he is better off with just one hand. When interviewed by CBS, he stated that his birth defect has made him an even better player than he would have been had he had two hands because it forced him to work harder.

Shaquem’s story serves as an incredible inspiration not only to children with disabilities, but to anyone facing a challenge that feels impossible. He has never allowed himself to be limited by his disability and does everything that a person with two hands can do. Because of his perseverance and hard work, Shaquem Griffin now lives his dream playing in the NFL for the Seattle Seahawks alongside his twin brother. Not only did Shaquem Griffin achieve a dream that had a one in a million odds against him, but he achieved it with one hand. Ultimately, Griffin’s story sends this important message: If you set your mind to something and pursue it with everything you have, the sky is the limit.